What Is Gwei? – The Cryptocurrency Explained

Many cryptocurrencies, like conventional money, can be divided into smaller units. Ethereum (ETH) has several Ether coin denominations, but the most important is Gwei, which is used to represent the network’s gas (transaction) fees.

Because there are so many projects based on Ethereum, it’s a good idea to understand Gwei in case you need to pay fees with it. Learn more about Gwei by sliding through.

Gwei is a combination of the words Giga and Wei. Gwei is a cryptocurrency denomination of ether (ETH), the digital coin used on the Ethereum network. Ethereum, like Bitcoin, is a blockchain platform where people transact to buy and sell products and services without the use of a middleman or third-party interference.

Gwei is also known as nanoether—the word nano denotes one billionth of anything. Some cryptocurrencies have such high fiat currency exchange rates that small amounts are required. These micro-denominations allow a cryptocurrency’s market value to rise as far as supply and demand will allow while still allowing for smaller transactions.

Gwei is the most often used ether unit since it is used to represent “gas” costs. In the Ethereum network, transaction power is referred to as gas. To complete a transaction, you must provide it with gas, which costs Gwei. Users pay gas fees to miners and validators to compensate them for the computational resources required to process and validate transactions on the Ethereum blockchain.

The Ethereum platform has its own coin, ether, or ETH. Ethereum is a blockchain technology platform that allows for the development of a wide range of decentralized applications (dApps), including cryptocurrency. The ETH coin is widely referred to as Ethereum, despite the fact that Ethereum is a blockchain-powered platform and ether is its cryptocurrency. Gwei is used to price the “gas” that is utilized to conduct transactions on the Ethereum network.

Gas is the price, or pricing value, necessary to complete a transaction or execute a contract on the Ethereum blockchain. The gas, which is priced in small fractions of the cryptocurrency ether, is used to allocate resources of the Ethereum virtual machine (EVM) so that decentralized applications such as smart contracts can self-execute in a safe but decentralized form.

The actual price of the gas is established by the network’s miners, who can refuse to execute a transaction if the gas price does not match their threshold, and network users seek processing power.

The following table shows the most common ether units. The currencies in the table each have an alternate name (in parenthesis) based on prominent personalities in the realm of cryptography. Gwei, for example, is sometimes known as Shannon after Claude Shannon, an American mathematician, cryptographer, and crypto-analysis expert.

Ether’s naming convention is a reference to its founding personalities, similar to how a $100 bill depicts Ben Franklin and a $5 bill depicts Abraham Lincoln. These nicknames are mostly used by Ethereum aficionados and insiders, however, it’s worth noting that Ethereum, like Bitcoin, employs opaque language and naming rules. 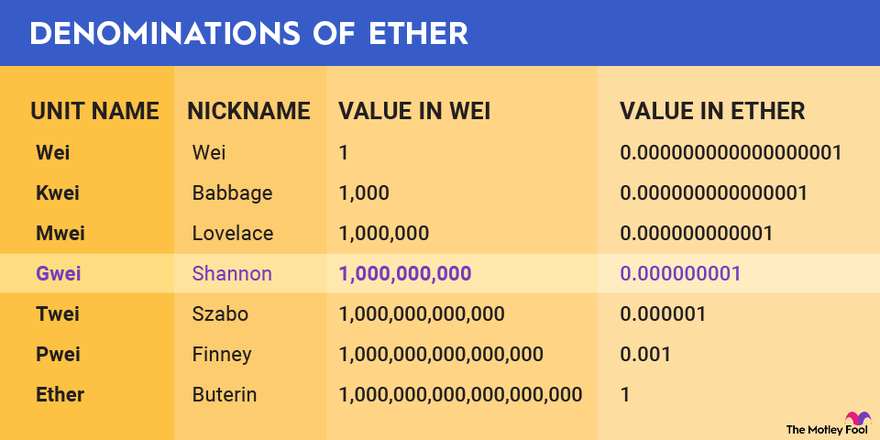 Here, in order of appearance in the table, is the significance of the ether units’ nicknames:

What Is Gwei Gas Price?

Gwei gas price is the fee paid to the network and transaction validators for the computational work of verifying a transaction. The standard transaction fee is 21,000 Gwei.

How Are Gwei Gas Fees Calculated?

The standard transaction fee in the Ethereum network is 21,000 Gwei. More complex transactions can cost more. You can calculate a transaction fee using the formula Gas Units (Limit) x (Base Fee + Tip).

How Many Gwei are in 1 Ethereum?

There are 1 billion Gwei in one Ethereum.

What is HODL in Crypto? -

Coinbase exchange Review: All You Need to Know About Coinbase Exchange

What Is NFT Staking And How Does It Work?

What Is Gas In Crypto Trading?